She invented her own cipher alphabet!: 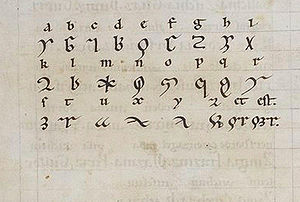 It appears to be a basic substitution cipher.

Hildegard von Bingen, an 11th-century nun who saw apocalyptic visions and was later canonized, had a cipher alphabet which she claimed came to her in a flash of inspiration.

"Some say her nuns used the Lingua to share secrets unknown to anyone outside the walls of their convent." (source).

St. Hildegard's researches into botany (see this translated excerpt of her Physica) and cosmology (see ch. 12 of Sungenis's Galileo Was Wrong vol. 2 PDF p. 463f., which includes exclusive translations from German of St. Hildegard; cf. The Principle documentary.) are impressive, as is the music she composed.